If you’ve already visited the North Shore, you more than likely encountered one of the area’s largest mammals- the white-tailed deer.  White-tailed deer are a medium-sized species of deer. They are native to North, Central, and South America. This hardy deer is extremely adaptable and thrives well in both cold and warm climates.

On average, a male white-tailed deer weighs around 200 pounds.  Although, they can get to be as large as 300 pounds! Females are considerably smaller and weigh around 100 pounds. They change colors with the seasons- from a reddish-brown in the summer months to a grayish-brown in the winter months.

You’ll start noticing fawns sometimes between May and July. An adult female deer can give birth to 1-3 fawns at a time each year. Fawns are born with white spots (like Bambi) that stick around for the first three to four months of age. If you catch a glimpse of a spotted fawn, you know they are still quite young! Mothers will often hide fawns lying down in tall grass while they feed. This is done to protect the fawn from predators. If you happen upon a fawn in the grass, leave it be! Mom is likely not too far behind and the fawn is fine and safe.

Deer are generally very social creatures and travel in pairs. Usually, it’s a mating pair or a mother and her fawn(s) as they usually stay together for up to two years before the fawn is old enough to mate. If you spot a deer crossing the road, slow down! There is like one or two (or even three or four) more right behind it.

Chronic Wasting Disease is a fatal neurological disease. It affects cervids, which includes white-tailed deer. While still relatively rare in Minnesota, a few cases have been reported in recent years. The condition is such a concern that the Minnesota DNR has a response plan and tracking on their website. One way you can help prevent Chronic Wasting Disease in the wild deer population is to not feed deer. When deer gather around feeders this increases the chances of the spread of the disease.

We recommend you do not feed wild animals, in general. It is very tempting, but if they get reliant on humans to feed and care for them, deer can become less capable of surviving in the wild and may get injured or harmed by gathering so close to highly trafficked areas.

On average, a male white-tailed deer weighs around 200 pounds, although they can get to be as large as 300 pounds! Females are considerably smaller and weigh around 100 pounds. They change colors with the seasons- from a reddish-brown in the summer months to a grayish-brown in the winter months.

Unlike the more elusive moose population, spotting a white-tailed deer is not hard. They are almost everywhere you go on the North Shore- even seen in populated areas.  But, if you’ve been to the North Shore in the winter months, you may have noticed something strange about the local deer. You tend to see many of them along Highway 61.  There’s a good reason for that!

With the cold temperatures and snowfall accumulating along the North Shore, deer are starting to navigate their way to specific spots to keep warm. Although it may come as a surprise, because of its size, Lake Superior influences the local weather acting as an air conditioner in the summer and a radiator of warmth during the winter. Because of this, deer are attracted to the shore and are seen in great numbers there during the winter months.

This migration brings them closer to Lake Superior and, thus, Highway 61 along most of the North Shore. They also enjoy licking the salt left behind by plows, so expect to see more white-tailed deer than usually right along the highway after a snowstorm. 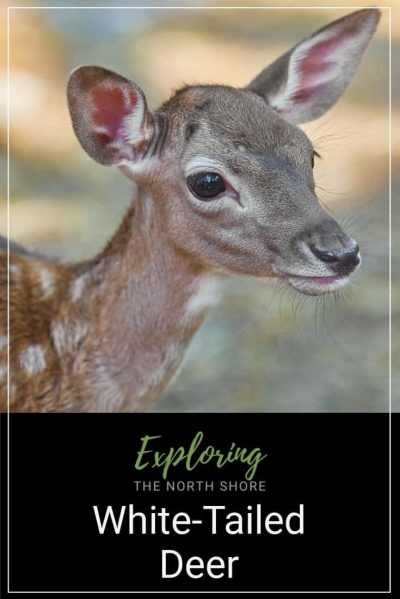