We love winters on the North Shore. In winter, the woods are incredibly quiet and peaceful. Plus, our location offers us the opportunity to witness some unbelievable Lake Superior phenomena. One of those phenomena is Sea Smoke, which happens in the winter, when the temperatures drop and the relatively warmer waters of Lake Superior meets with the colder air temperatures.

When this happens, it creates the appearance of “smoke” billowing off of Lake Superior. The smoke is really water vapor that rises and condenses into fog since the cold air above is already saturated with water. The fog then rises like smoke from the lake’s surface. When the smoke is paired with a heavy dose of cold wind from the north, “Steam Devils” may form, which are tornado-looking rising clouds.

As previously mentioned, the water of Lake Superior is only relatively warmer.  In the winter months, the water generally sits at a frigid 33-35 degrees. Not exactly “warm” by almost anyone’s definition, but when compared to below freezing temperatures that envelopes the shoreline for most of the winter, the waters are warmer.  Because of this, the best time of the year to see Sea Smoke on Lake Superior is in the colder winter months, especially early in the morning when there is more moisture in the air.

When and Where to Spot Sea Smoke

Want to catch a view of Sea Smoke?  Plan a trip anytime between mid-November to mid-April and you stand a pretty good shot at catching a glimpse of seas smoke rolling along the lake, unless, of course, the lake has frozen over.  This has only happened a handful of times in the past 20 years.

The cliffs along the shore of Superior offer a perfect spot for viewing the smoke. Finding the idea cliff location is also great for shooting Sea Smoke photos. We recommend finding a spot about 700 feet above Lake Superior, which will give you a great angle to capture the rolling smoke. However, you can see sea smoke from pretty much anywhere along the shoreline. And, if you are lucky, you might even be able to capture a ship looming in the background. Because of the increased likelihood of waves in the early winter months, ships tend to sail closer to the shoreline. This increases the possibility of seeing a ship sailing through the sea smoke. But to see that you want to get here before the shipping season closes, typically in January. 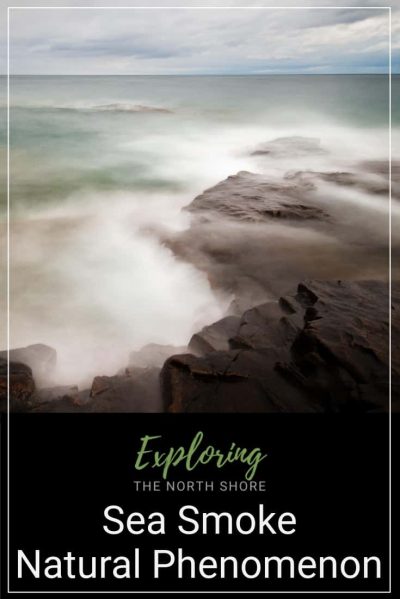