Sitting on the corner of Outer Drive and Adams Blvd, just two blocks up from the Highway 61 street lights in Silver Bay, sits a cartoonish looking statue consisting of two black spheres, one for his head and one for his body, red gloved arms and red booted legs. The statue is known as Rocky Taconite. He is a unique monument to the taconite industry that built the town. Referred to as a “strange little rock man” by Ruth Koepke, a member of the Bay Area historical society, Rocky has been delighting visitors with his adorable self since the 1960s.

According to the Lake County News Chronicle, in 1961 then 26-year old Neil Forsberg was working for his uncle’s ornamental iron company in South Minneapolis when a bid request came in from the Reserve Mining Company to build a statue for the young company town. The company’s $500 bid won. Forsberg was put in charge of figuring out how to construct the bulbous statue. Reserve Mining didn’t give the young builder much to go on. They only sent along drawing created by John Simrak, and the request that the statue be made out of iron.

The crew used a hollowed-out tree stump as the frame. Then, they formed separate iron pieces together by beating them with hammers while still hot to form the spheres.

Reserve Mining never told Forsberg how large the statue should be. He was not given any dimensions at all, so he eyeballed the length and width of the arms and legs, which are made out of iron pipes, based on Simrak’s drawing. In the end, the statue stood 12 feet tall.

Forsberg then used his own hands to trace out the statue’s hands. He created the statue with his left-hand open, to wave at passing tourists. In his right hand, he placed a Swedish pick. The pick Forsberg used was actually his own Grandfather’s pick that came all the way from Sweden!

The statue was then given his accessories. These include red boots, a red belt with a buckle, red gauntlets, and a helmet. At that point, two years after Forsberg received the sketch from Reserve Mining, the statue depicting a character made of taconite pellets was complete. From there, he was shipped up to his new home of Silver Bay, Minn.

Once at home, the Reserve Mining Company held a competition to name the statue. The two finalists were Petey Pellet and Rocky Taconite. Rocky Taconite won out. Then, on or around July 15, 1964, he was put atop his taconite perch and placed in the town’s center. Originally, Rocky lived in the park area located in front of the post office in downtown Silver bay. He was later moved to his current spot right at the entry to the town on Outer Drive.

While the statue sitting on Outer Drive in Silver Bay is popular, in recent years it’s another version of Rocky that has become well-known around the world.

In 2014 Rocky turned 50 years old. One local Silver Bay resident came up with an idea to commemorate Rocky’s birthday in a special way. Andy Buell had receive a small bobblehead version of Rocky as a gift. He made the decision to take him along on a trip to Israel and Jordan. There, Rocky posed in front of Petra, the Dead Sea, and overlooking the Sea of Galilee.  Andy posted the photos in the Facebook group North Shore Tribe. Along with the photos, Andy included some interesting facts about each place Rocky had visited. Andy says he wanted to keep Rocky’s journey “fun and a little educational”.

Since then, Rocky has become Andy’s constant travel companion, joining him on trips to New York City, New Orleans, and Branson, Missouri. He even joined Andy’s wife and daughter on a trip to Hawaii.

Others have taken the idea and ran with it. Since 2014 a number of Rocky Taconit bobbleheads have joined human companions on vacation. The beloved community mascot has become a globetrotting superstar. He’s even met some celebrities!

There is now a place for loyal Rocky Taconite fans to come together and share their Rocky stories and images. You can find it right here on Exploring the North Shore! If you’re a fan of Rocky, join the Rocky Taconite Fan Club today!

Referred to as a “strange little rock man” by Ruth Koepke, a member of the Bay Area historical society, Rocky has been delighting visitors with his adorable self since the 1960s.

Rocky Taconite sits on the corner of Outern Drive and Adams Blvd in Silver Bay, Minnesota. From the street lights on Highway 61, turn into town. That would be a left if coming from Duluth and a right if coming from Canada. You will see Rocky just a couple of blocks up on the right hand side.

Get Your Own Rocky Bobblehead and Other Apparrel

Want a travel strange little rock man travel companion of your very own? You can get your own Rocky Taconite bobblehead at the Silver Bay Visitor’s Center! The Visitor’s Center is open various hours from Memorial Day until sometime in October.  You can reach the visitors center at 218-226-4534 for hours of operation in the summer months, as well as availability of the Rocky bobbleheads.

Also, The Big Lake in Grand Marais carries a few t-shirt and 3/4 sleeve shirt options bearing Rocky’s image. If you don’t want to carry a traveling Rocky bobblehead with you, you can always show your Rocky pride with a t-shirt!

Listen to the Statues of the North Shore podcast episode featuring Rocky Taconite: 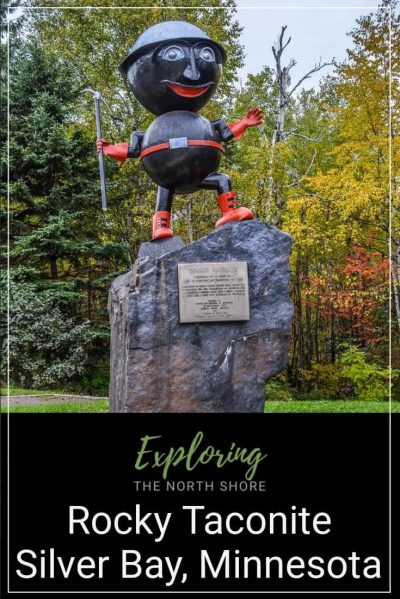 Nature
Root Beer Water
Root Beer Water Have you ever been exploring the North Shore and come across a river or a body of ...
Hidden Gems
George Crosby Manitou State Park
George Crosby Manitou State Park If you are looking for a state park that’s a bit off the beaten ...
Animals
White-Tailed Deer
White-Tailed Deer If you've already visited the North Shore, you more than likely encountered one of ...