Located just a few miles inland from Lake Superior, near the town of Grand Portage, the Pigeon River sudden cascades down a 120-foot cliff creating the largest waterfall located, at least partially, in the United States. This waterfall is known as the Pigeon River High Falls.

Due to the fact that the waterfall is also partially in Canada, it does not hold the title for the highest waterfall contained entirely within that state of Minnesota. That title goes to the 70-foot High Falls in Tettegouche State Park. Even so, it is still a sight to behold! Visiting the falls can be enjoyed by most as Grand Portage State Park is an accessible State Park. The High Falls viewing platforms can be accessed using paved trails and without climbing any stairs.

In addition to being beautiful, the Pigeon River High Falls also plays an important role in the area’s history. This includes both in the past and in more recent years.

Because of the dramatic drop at both the High Falls and the smaller Middle Falls made the Pigeon River impassable by hunters and fur traders, an alternate route had to be found. This is the reason the famous 8.5-mile Grand Portage was created. There is evidence that the Grand Portage has been used for over 2,000 years. Originally, it was used by the local Anishinaabe tribe, who knew it as Gichi Onigamiing. Then, later, by French fur traders working for the North West Company.

While the Grand Portage didn’t see much use by the fur trade after operations moved to Canada in the early 1800s, many still travel along it as a connecting point during canoe and hiking trips. The popularity of the Grand Portage and the High Falls on the Pigeon River led to the first-ever collaboration between a US state and a Native American tribe to open the area up to visitors. To this day, the Grand Portage State Park holds the unique title of being the only park in the nation that is managed in partnership between a state and a tribe. This makes it a historic state park in more ways than one. All thanks to one very tall waterfall.

Located just a few miles inland from Lake Superior, near the town of Grand Portage, the Pigeon River sudden cascades down a 120-foot cliff creating the largest waterfall located, at least partially, in the United States. This waterfall is known as the Pigeon River High Falls.

Getting There – US Side

The Pigeon River High Falls is located on the US/Canadian border in the Grand Portage State Park. The park is located on the non-lake side of Highway 61 just before the US/Canadian border crossing- look for the signs. Park in the parking lot and then take the accessible, paved trails into the park. About 0.5 miles into the park you will hit a boardwalk. At the end of the boardwalk, you can continue straight to two accessible viewing platforms, or go up the stairs to the left to the higher platform.

Getting There – Canadian Side

From both locations, the Pigeon River High Falls can be enjoyed all year round.  Although trails may not be maintained in the winter months, they make a great cross-country skiing or snowshoeing trek as the waterfall is quite spectacular when frozen. Then, plan a return trip in the spring to view the High Falls during Waterfall Season. This runs from mid-March to mid-April. Snowmelt from further inland increases the amount of water flowing over the cliff making for a dramatic showing. 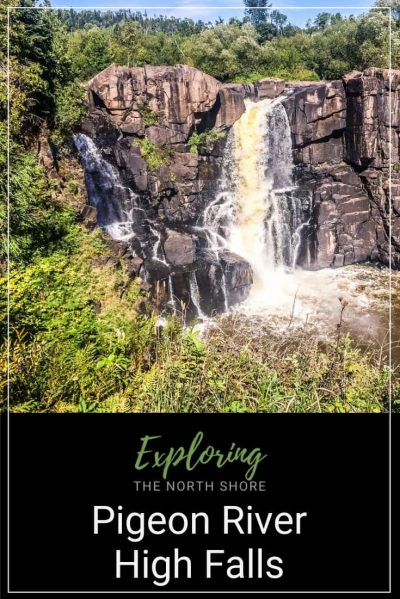