Organized Crime on the North Shore

The North Shore of Lake Superior is no stranger to organized crime. Many gangsters, bootleggers, and criminals have frequented the shore. Additionally, orth Shore resorts served as a “secret hideaway” for many notorious Chicago-area gangsters of the 1920s and 30s.

The following are just a few stories that have been passed down or well-documented tales of organized crime on the North Shore.

From “Lutsen Resort History”: Gangsters from Chicago found Lutsen to be a great “getaway,” including Baby-Face Nelson, John Dillinger, and Al Capone. Capone arrived with his “wife” and requested a more remote spot than the lodge. They were offered a fish house two miles away, and when it was discovered that the fish house was riddled with bullet holes, the owners demanded, and received, $20 extra from Capone.

Al Capone is likely the most well-known member of organized crime who frequented the area.  So, his visit to Lutsen Resort wasn’t too unusual. But, what was he doing that required such a remote place to stay? Sure, he came up with his mistress (I’m assuming).  Maybe he wanted some privacy for her, but what else went on in that fish house? From the story, it doesn’t appear anyone was injured or during Capone’s stay, but one has to wonder why he’d shoot the place up. “Riddled with bullets” implies more than just a couple of one-off gunshots. Perhaps he got a bit trigger happy after having a few? But, hey, props to Capone for handing over the $20, right?

It is also said that Al Capone was a frequent visitor to Illgen City’s resort. He and other well-known gangsters of the time would often stop by and spend a few nights before continuing on to “secret” Northern Resorts.

In the 1940s and 50s, Tommy Banks made a fortune running bars and liquor stores in the Minneapolis/St. Paul area, despite being a convicted felon which should have prohibited him from owning an alcohol business. Before that, during Prohibition, Tommy Banks operated The Syndicate, supplying alcohol to Minneapolis bars. Despite being connected to several high profile murders and, of course, running alcohol during Prohibition, Tommy Banks was never convicted or even tried, for these crimes.  Instead, much like Al Capone, authorities got him in a 1937 charge of tax fraud.

Tommy’s connection to the North Shore can be found on the Gunflint Trail where Tommy owned a cabin located on Hungry Jack Lake. It was a part of Hungry Jack Lodge and maintained by Bill Needham, a Gunflint Trail local who formed an “unlikely friendship” with Tommy Banks.  This friendship was the basis of the display at Chik-Wauk Museum during the summer of 2019.

Unlike other members of organized crime, Tommy Banks ended up living a long life. He died in 1985 at the age of 91 from heart disease.

Hear more about Tommy Banks and his connection to Hungry Jack Lodge in this 2016 report by WTIP’s Joe Friedrichs:

The Naniboujou Social Club opened its doors to a select few who were "in the know" in 1928. The social club catered to a few well-known guests, including famous names of time like Babe Ruth and Jack Dempsey. It was also a popular destination for those mobsters from Chicago that needed a quiet place to rest for a little while.. Al Capone and John Dillinger are said to have been frequent visitors.

In 1927, construction on a private club on Minnesota’s North Shore began. It was funded by the rich and elite from Minneapolis, Chicago, and other midwestern cities. Yes, some organized crime money was involved, too.

The Naniboujou Social Club opened its doors to a select few who were “in the know” in 1928. The social club catered to a few well-known guests, including famous names of time like Babe Ruth and Jack Dempsey. It was also a popular destination for gangster from Chicago that needed a quiet place to rest for a little while. Al Capone and John Dillinger are said to have been frequent visitors. Usually, when someone references a “secret North Shore resort” where gangsters and their associates would hideout, they are usually referring to the Naniboujou Social Club.  Although there were several others in the area during this time, Naniboujou was the most popular and most well-known today.

End of a Social Club, Start of a Resort

The Great Depression led to Naniboujou’s closure in 1935 and the clubhouse was shuttered for several years. It later reopened as a public lodge and resort that is still in operation today.  You can head up to the resort, located near the Brule River just outside Hovland, for an incredible Sunday Brunch or Afternoon Tea.  It’s ties to the organized crime were relatively short-lived, but remains notorious local lore.

If these tales of organized crime interest you, be you’ll probably love the story of the Trenchcoat Bank Robbers. This article header contains an image of one of the robbers, but I have created a separate article for this incredibly interesting North Shore story. Click the link to read the story of how the North Shore became connected to the most prolific bank robbers in US history.

Listen to the “Organized Crime” episode of Exploring the North Shore: 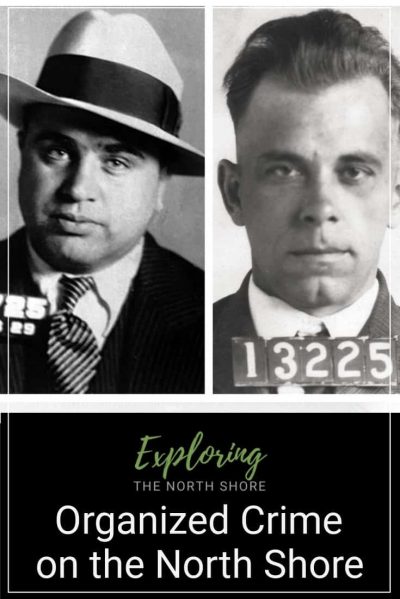