Once and Future - An Art Installation

Next time you wander through the woods near the Grand Marais Recreation Park and Campground, be sure to keep your eyes open. You might just see something unusual in the woods. Standing about 6 feet tall and 9 feet long, this life-sized woodland caribou is part of an art installation titled “Once and Future”. Created by artist Corrie Steckelberg, the installation is actually a 3-part series that was installed in Grand Marais on April 29th. With plans to remain in place for a year, the three caribous are about to do something that may surprise you – they are about to come to life.

The History of Caribou Along the North Shore

Eventually, they headed north. The few that remained were either hunted or killed by parasitic ringworm carried by whitetail deer.

Since 1935 there has not been a wild caribou spotting in Minnesota. Until now.

OK, so maybe the caribou here now aren’t wild, but they are pretty wild to stumble upon! The three-part installation called “Once and Future” depicts adult woodland caribou occupying space where they once lived in the wild.

Artist Corrie Steckelberg describes the installation on her website as “a large scale public artwork that contemplates the realities of an ongoing mass extinction and climate change, while still holding home for the possibility of growth and rebirth”.

The caribou were designed and built with funding from a Minnesota Arts Board grant. The “bones” of the caribou are metal rebar to create the shape. Corrie then sewed together layers of burlap, all obtained from the nearby Fika Coffe Shop, with dirt and seed in between the layers. She then sewed the pieces of burlap together around the metal rebar using meat thread and yarn.

The result: Three somewhat Frankenstein appearing caribou sculptures known as “Once and Future”.

The Journey to Installation

After receiving funding from the Minnesota Arts Board, Corrie then had to seek approval from a number of local entities before her caribou could be installed. As she says, it was harder than she thought it would be. Eventually, the project was approved by the Creative Economy Collaboration, the Grand Marais Arts Advisory Board, and the Grand Marais Parks Board.

Finally, starting on April 29, 2021, the caribou were installed on public land in Grand Marais.

The caribou might be a little odd to stumble upon if you’re not expecting to see them, but they are pretty neat once you get up close to inspect them. And soon, their appearance may change entirely!

“Once and Future” is purposefully temporary. Corrie has the approval to keep them in place for at least one year, possibly more. During this time, the seeds sown into the caribous’ skin will start to sprout. Turning these three caribou into something of a life-sized Chia pet.

Corrie says she put all sorts of seeds inside each caribou. Everything from grass to wildflowers and even squash seeds. “I put a lot of seeds in there!” she said during our May interview for the Exploring the North Shore podcast. During our visit, we noticed the seeds had already started to sprout. As the weather warms up, more seeds should sprout. Given the variety of seeds inside each caribou, it’s impossible to predict what they will eventually look like. We imagine, though, that they will look very different as they begin to green up. Then, again in the fall, their appearance will change as the sprouts begin to die. Snow cover will change their appearance again. Finally, we will enter next spring and see what has become of the caribou.

Another unknown, how well the burlap will hold up. As Corrie says, burlap is not a long-lasting material. In the harsh winters experienced on the North Shore, all that may remain come next spring may be the metal rebar. Only time will tell.

At the end of the year, the installation may be removed or may remain for another year. This is up to the Parks Board to determine. For now, all three caribou stand proudly in Grand Marais, reminding us of all the things we have lost.

If you are lucky enough to be visiting Grand Marais between May 2021 and the spring of 2022, you can go visit all three caribou that are part of the “Once and Future” art installation. They are installed in public areas, two of which are in the open and easy to find.

In the Grand Marais Recreation Park and Campground

Upon driving into the campground area, look around. The first caribou, lovingly named Little Buddy, is out in the open at the top of the drive. We’d say he’s easy to spot, but he does blend in nicely with his surroundings. So much so that I passed him 5-6 times before seeing him. And, only spotting him because I was told where he was.

The second caribou in the park is a bit harder to spot. Corrie has requested we keep his location a secret, leaving it up to those who venture into the woods and try to spot him themselves. Keep your eyes open, I also missed this one the first time I passed him.

In the Grand Marais Harbor Park

Head to the Harbor Park in downtown Grand Marais. Go across the street from the Gunflint Tavern, and head towards the lake. Nestled between some shrubs near a park bench, you will find the third caribou.

Though she is the smallest of the three, the Harbor Park caribou is the easiest to find.

Hurry! This installation won’t last long. We will update this post frequently with how the caribou progress over the next year. You can also visit Corrie Steckelberg’s website, Wulfhelm Art, and her Instagram for updates on the project.

Also check out the TikTok series of videos done by Cascade Vacation Rentals to see a video of the caribou in the woods.

The Once and Future Podcast Episode

Jaye and Martha met up with artist Corrie Steckelberg on a misty day in May to learn more about Corrie’s art installation “Once and Future”. Learn more in this interview on “Exploring the North Shore Podcast”. 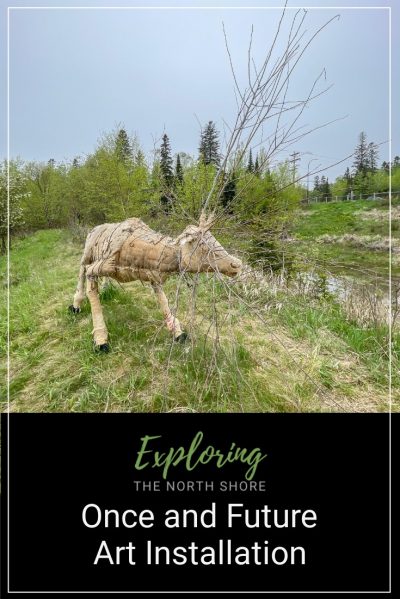