If you have spent any time along the shores of Lake Superior, you know that the lake can be quite moody. Lake Superior’s Twitter feed is no different.

Lake Superior expresses her dislike for November every year with her Gales of November. Throughout the year she can turn from ravaging the shoreline with 30+ foot waves one day to being crystal clear and calm the next.  If Lake Superior were a person, there could be many words used to describe her.  Feisty.  Powerful.  Unpredictable. Beautiful.  Sassy. So, it’s no surprise that her online persona has also taken on some of these traits as Lake Superior’s Twitter continues to stir up a storm to anyone who challenges her.

Lake Superior’s Twitter account (@LakeSuperior) has been around since 2009.  It wasn’t until January of 2018, however, that Lake Superior found herself in a heated Twitter battle with… well, almost every other large, natural formation on the planet. It seems to have started with Mount St. Helens. Then, it grew to include The Grand Canyon, Mount Everest, Mount Baker, Michigan’s Upper Peninsula, Yellowstone, and more.  The Great Lake even managed to bring Canadian Prime Minister Justin Trudeau into her drama by the simple request: “OK, it’s time to give me the legal rights of a person. @JustinTrudeau I’m looking at you to make this happen.”

The battles have continued over the months.

In February of 2018, she took on the rest of the Great Lakes:

Although, for the most part, Lake Superior loves her siblings: 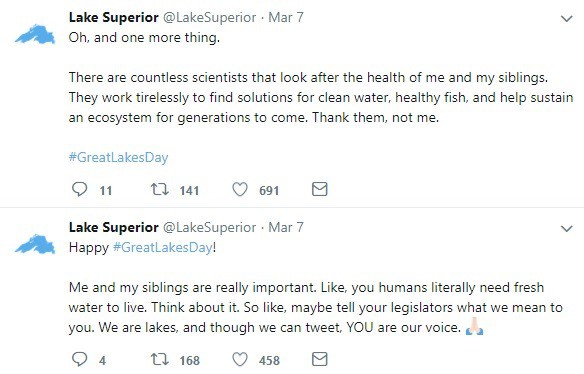 In April of 2018, Lake Superior took on Lake Pepin over an MPR News Poll to find the most-loved lake in Minnesota: 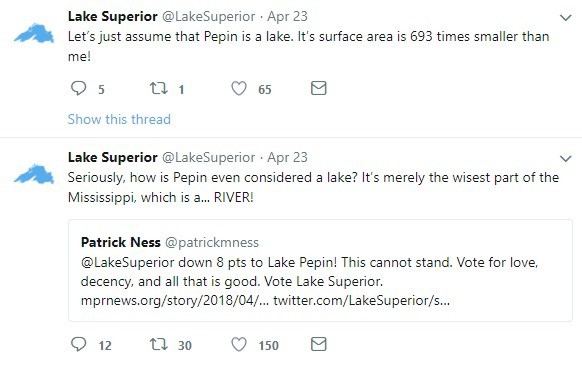 Initially, it seemed as though Lake Superior had lost to the tiny (in comparison) Lake Pepin, located in southeastern Minnesota. However, a closer look at the MPR poll showed illegal vote stacking in favor of Lake Pepin. Lake Superior was subsequently named the victory.  She didn’t keep quiet about it: 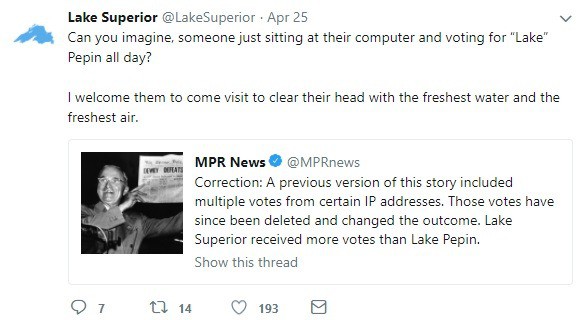 Later, Lake Superior went on to beat Lake Kabetogama in the finals and was (rightfully) awarded the title of Minnesota’s Most-Loved Lake.

@LakeSuperior isn’t just about starting battles, however.  She shares news stories that mention her, updates visitors on her mood, and encourage others to share their stories about her.

To many, Lake Superior’s Twitter account embodies a lake they have known and loved for so many years. You could say it has given her the personality we all know she possesses.

I am not sure who the human is behind the account, and, personally, I don’t want to know.  They are providing all of us who love Lake Superior (and use Twitter) a fun source of entertainment. After reading through some of her posts, you’ll understand why we always warn guests to always use caution when interacting with Lake Superior. This warning now extends onto Twitter, as you don’t want to find yourself on the receiving end of another Lake Superior Twitter battle!

Because we all know she is truly Superior. 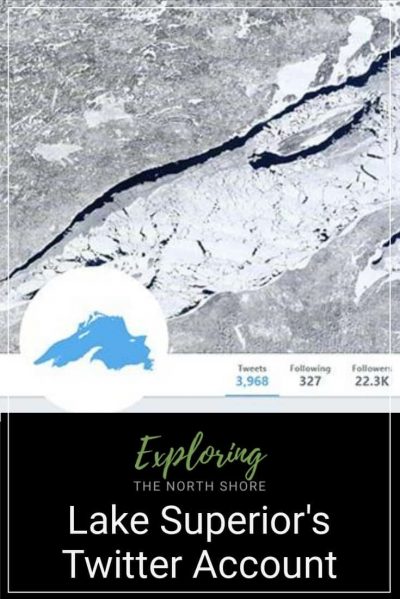