The Gales of November

You’re wrong if you think there isn’t anything to do on the North Shore during the late fall/early winter season. As the season changes and the temperature drops, Lake Superior becomes alive with the Gales of November!

The Gales of November are winds that exceed 39 MPH. This is an occurrence that happens about once a week during the month of November. The gales are created by air pressure differences between low-pressure systems and high-pressure systems. The greater the difference, the higher the wind speeds are. These winds create enormous white caps just like you’d see in the ocean.

You haven’t seen Lake Superior until you’ve seen what the gales do to the lake. During the Gales of November, waves can get to, or exceed, 30 feet!

These gales also produce some of the lake’s most violent storms.  The Mataafa Storm of 1905 struck Lake Superior on November 27th and 28th causing mass destruction.  29 vessels were either destroyed or seriously damaged, and 36 seamen lost their lives.  That storm led to the construction of the Split Rock Lighthouse near Two Harbors. Then, on November 10, 1975, a similar storm sank the SS Edmund Fitzgerald.  The Fitzgerald was the last large freighter to sink on Lake Superior. Finally, in 2010, the Extratropical Cyclone hit Northeastern Minnesota with winds up to 65 miles per hour.

While the storms of the past were noteworthy due to the damage they caused the Great Lakes shipping industry, the area has experienced many more like them. Thanks to modern weather forecasting and navigation, these storms don’t bring the catastrophic results they once did. At least, not to the shipping industry.

In recent years, however, storms have caused much damage to the Lake Superior shoreline. In Duluth, Brighton Beach and Canal Park have both sustained millions of dollars in damage from violent waves. Elsewhere, as the water level on Lake Superior continues to rise, damage to private and public lands is frequently reported. And in 2019, a November storm toppled the famous Sea Stack at Tettegouche State Park.

Very few people want to find themselves in the middle of the Lake during one of these storms.  Even seasoned sailors know to respect the fury of Lake Superior in November. A small group of people, however, find themselves flocking to the shoreline during these storms.  A hardy group of surfers have found their spot along the shore. It’s not uncommon to see them in Duluth or up by the Kadance River in Cook County.

Many others find themselves drawn to the shoreline, at a safe distance, to view the waves. It’s hard to explain what the Gales of November are like, they are really something you have to experience in person. Just keep your safe distance, and be careful. People have died after being caught in waves along Lake Superior.

The Gales of November have produced some of the lake’s most violent storms. The Mataafa Storm of 1905 struck Lake Superior on November 27th and 28th causing mass destruction. 29 vessels were either destroyed or seriously damaged, and 36 seamen lost their lives.

Come See The Gales of November

While the Gales of November are known to put on a spectacular show, it’s wise to keep a safe distance. Enjoying from afar means you can enjoy the waves and remain dry and on solid land.

Some of the best viewing for the Gales of November are Brighton Beach in Duluth. Here, you will usually find a dozen or so surfers enjoying the waves. The Split Rock Overlook on Highway 61 is another great viewing point. Fron the overlook, you can enjoy seeing the waves crash against Split Rock cliffs. Black Beach in Silver Bay, and Grand Marais’ East Bay (from the Coast Guard Station parking lot) are two other popular viewing points. Of course, pretty much anywhere you go, the waves will be during the gales. So come on up anytime in November and experience the Gales of November for yourself.

Of course, you can view the gales earlier or even later than November. You will find that many September and October storms have resulted in large waves,too. This is evident from a September 2019 storm that brought large waves to Grand Marais, as captured in the video below. 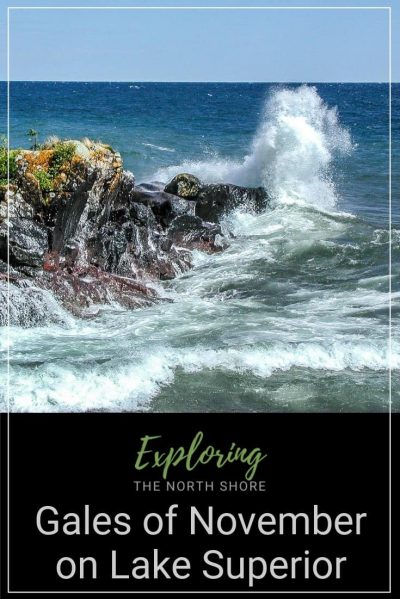