The Ely Tunnel is a long-abandoned railroad tunnel that was used by the mining industry. The 520-foot tunnel is located within the Magney-Snively Park in Duluth. The tunnel is also part now part of the Superior Hiking Trail (SHT).

During the height of the iron ore boom, train transportation of raw materials from the Iron Range in north-central Minnesota to the port towns along Lake Superior was an essential element in a booming industry.  Every day, trains barreled through the Northern Minnesota landscape. It was a sign of prosperous times in the region.

Being one of the first railways to run into the area, The Duluth, Mesabi, and Iron Range Railroad (DM&IR)  took advantage of the most direct path into Duluth.  So, when other railroads came about, they had to take a more scenic route.

The Duluth, Winnipeg, and Pacific Railway (DWP) was created to connect Virginia, MN with a yard in West Duluth. Since DM&IR had the easiest route, DWP planned their railway to run to the west. This route created one very large challenge: Ely’s Peak.

The Construction of Ely Tunnel

The DWP railway track was laid within the beautiful Duluth park now known as the Magney-Snively Natural Area. Magney-Snively is an expansive nature reserve located just past where Spirit Mountain is today.  It ascended into a formation known as Ely’s Peak, in the area now known as Short Line Park. From there, the railway would descend into the town of Duluth.  However, rather than going over Ely’s Peak, the train passed through Ely’s Peak.  Via a tunnel, of course!

Construction on the tunnel took over a year. Crews worked slowly and carefully on the 520-foot Ely Tunnel, clearing only about 10 feet per day.  In the fall of 1911, the first track of the DWP Tunnel at Ely’s Peak was laid.  They completed the route to Duluth in 1912 when. After that, almost daily, a train would pass through the tunnel.

Several large shifts in the iron ore industry happened in the 1980’s.  One of these shifts was the merger between DWP Railway and the Canadian National Railroad.  The merger meant trains from Virginia to Duluth now had a more direct path.  As a result, Ely Tunnel ceased seeing daily train traffic.

Then, at some point in the mid-90’s, the railway was abandoned altogether.   The DWP tracks were pulled up and the area where the tracks once lay became part of the SHT.  With that, the area became open and accessible to the public.

The tunnel is located on public land and available for all visitors to explore. The tunnel is less finished than most railway tunnels in the area. Jagged edges of the basalt and granite rock looming overhead make it hard to believe that this tunnel was once an active train tunnel.  After heavy rains, water can be heard pouring down from the top of the tunnel.  The heaviest water flow seems to be right in the middle of the tunnel where it was the darkest. This freezes in the winter months. Large rocks also lay in wait to trip you up as you venture through. For these reasons, it’s advisable to bring a flashlight for your walk through the Ely Tunnel.

Rock climbing is a popular activity at Ely Tunnel. Anchors have been placed along the eastern mouth of the tunnel, allowing for safe climbing.

All in all, Ely Tunnel a nice hike to a cool little gem hidden in the hills surrounding Duluth.  Definitely a must-see for Duluth visitors looking for something a bit off the beaten path.  You can go and enjoy the miles of hiking trails after exploring the tunnel, or bring your climbing gear and enjoy a challenging climb around the mouth of the tunnel. The tunnel, and Magney-Snively Park in general, make for a great day trip or a quick hike to explore a cool tunnel.

Ely's Peak tunnel ceased seeing daily train traffic. Then, at some point in the mid-90's, the railway was abandoned altogether. The DWP tracks were pulled up and the area where the tracks once lay became part of the Superior Hiking Trail. With that, the area became open and accessible to the public.

Other online resources can make the tunnel appear difficult to find.  In fact, we’ve heard first hand that finding the tunnel can be tricky.  However, this is usually due to visitors not knowing exactly where to park and enter Magney-Snively to find the tunnel.  Turns out, getting there is pretty easy! At least, it is if you park in the right place!

The problem is, most people start from the Munger Trail Trailhead, which leads you along several forked paths.  Take the wrong fork and you may not end up at the tunnel.  If you enter “Ely Tunnel” into your navigated it will like try to have you park at the Munger Trail Trailhead, even. But, if you park at the Ely’s Peak Parking Area, the path to the tunnel is actually very simple and direct. We imagine it would be hard to get lost taking this route, in fact.

Here’s a map showing the most direct route to Ely Tunnel: 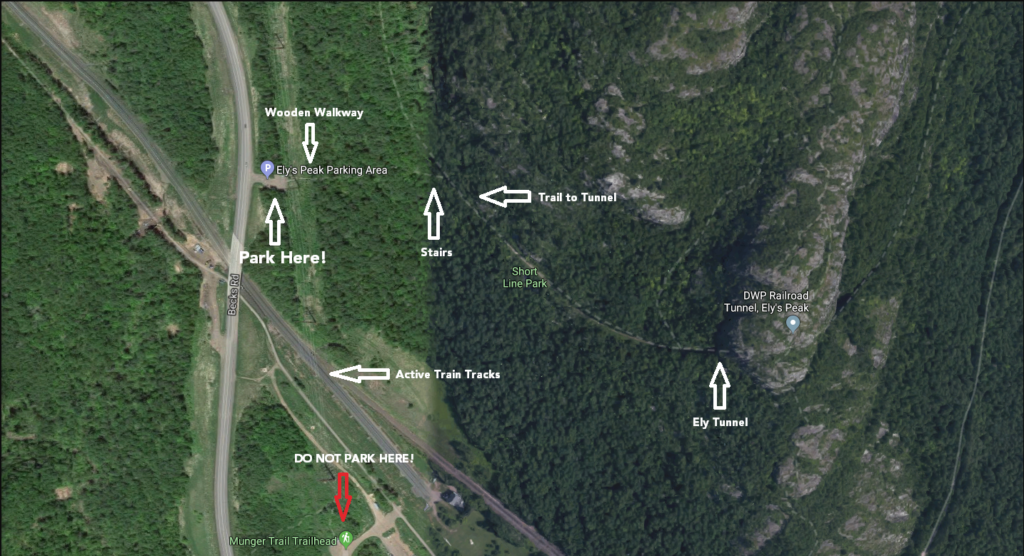 If you’re coming from someplace toward the top of the hill with easy access to I-35, this is the route you will want to take.  From I-35 take the Midway Rd. exit and turn south. Midway Road soon turns into Becks Road.  A little over 2 miles down Becks Road, you will see the Ely’s Peak Parking Area on the left-hand side.  If you find yourself driving over some railroad tracks, you’ve gone too far.

If you are coming from pretty much every other part of Duluth, the Grand Ave route is the way you want to go.  You can access Grand Ave from I-35.  Drive southwest on Grand Ave where you will pass the Lake Superior Zoo and Spirit Mountain ski area.  Grand Ave becomes Commonwealth Ave near Gary New Duluth.  Turn right onto Becks Road shortly before entering Gary New Duluth.  About 2 miles after turning onto Becks Road you will drive over some railroad tracks. Right after that, the Ely’s Peak Parking Area will be on your right.

Want to take the scenic route?  W Skyline Parkway winds its way through the Magney-Snively Natural Area, passing the Magney-Snively Trailhead and the Bardon Peak Overlook before it comes to an end right at Becks Rd.  Turn left onto Becks Rd and you are just one mile from the Ely’s Peak Parking Area.  Again, if you pass over the railroad tracks, you’ve gone too far.

Then, Once in the Parking Lot…

From here, you are only 0.35 miles from the entrance to Ely Tunnel. You will see a wooden boardwalk leading into the woods from the parking lot.  When the boardwalk ends, you will briefly walk along a well-traveled trail until you hit a set of stairs. Take those up. Once you hit the top you will be at the trail where the NWP Railway tracks once lay.  Go to the right and walk about a quarter-mile.  You’ll round a corner and, suddenly, the east entrance of the Ely Tunnel will be there, awaiting your visit.

Check out the photo gallery below for visual directions to the tunnel. 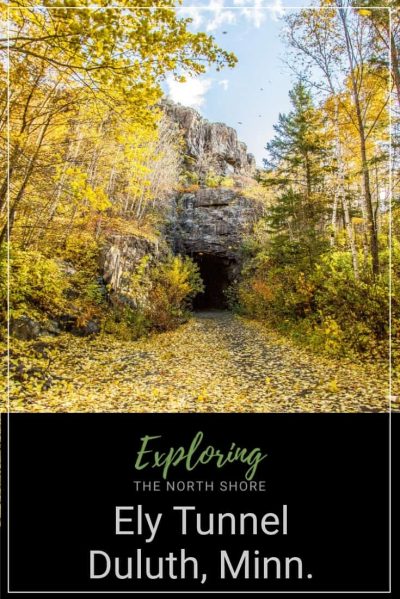 History
The April 2020 Fires
The April 2020 Fires On Monday, April 13th at about 1:30 PM, a fire broke out in the Crooked Spoon ...
Nature
Lupine
Lupine The pinks, purples, and whites of the lupine flowers explode color all over the North Shore ...
Waterfalls
Devil’s Kettle Waterfall
Devil's Kettle Waterfall Located on the Brule River flowing through Judge C.R. Magney State Park ...