Located on the Brule River flowing through Judge C.R. Magney State Park near Hovland, MN, 20 miles north of Grand Marais, MN, you will find what is arguably the world’s most mysterious waterfall that has been baffling visitors for decades.  One side of the river rumbles onto a stone embankment and down the rocks as waterfalls typically do.  The other side, however, flows into a geological wonder known as the Devil’s Kettle Waterfall, and… disappears?

The Mystery of the Devil’s Kettle Waterfall

The mystery of the Devil’s Kettle has been stumping visitors and geologists alike for a number of reasons.  For one, the rock that the kettle formed into is Rhyolite. This rock is formed from a volcanic eruption and it’s normal to find small kettles in this kind of rock. Especially, near waterfalls, because of the force of the water and the sand and rocks carried by the river flow.

However, the Devil’s Kettle Waterfall is special in that this isn’t a small, shallow pothole- the bottom cannot be seen. To date, it’s true exit point remains (mostly) unknown.  So how and why the Devil’s Kettle formed the way it did is one mystery, but the mystery most often discussed when talking about the Devil’s Kettle is where exactly the water goes once it enters the Kettle.

The Theories of the Devil’s Kettle Waterfall

However, there are a few reasons why people have doubts about this theory, even though it makes sense.  Primarily because, to date, the actual location where the water re-joins the river has yet to be determined. Many people are of the mindset that the mystery isn’t solved until someone can pinpoint the precise location.  Another reason for the doubting is because of all the things people have thrown into the Devil’s Kettle over the years, only to have these things disappear. Simply never to be seen again.

You see, before 2016 the most popular theory was that the water traveled along some sort of underwater cave system. Or, it met up with an underground river/water system. Eventually, the water mptied out into Lake Superior about a mile and a half away.  Dye, ping pong balls, GPS trackers, and more have been tossed into the Devil’s Kettler Waterfall. Then, people would watch the lake. Just waiting for signs of the items they threw in to appear. These things were never seen again- including below the waterfall or anywhere the Brule River.

This has been explained away by geologists as being the result of the sheer force of the water flowing into and around the kettle. Basically, it destroys anything thrown into it.  But, again, for many, seeing is believing. All anyone has ever actually seen are these items mysteriously disappearing.

The Devil’s Kettle Waterfall May Forever Be a Mystery

News articles regarding the 2016 findings indicated that researchers were going to return to Brule River in the fall of 2017, when water levels were low, and do another dye test to prove their theory. It appears this never happened due to the DNR highly recommending that this sort of experiment not be done. Perhaps this was for ecological reasons.  For many, this leaves the mystery of the Devil’s Kettle Waterfall unsolved, wanting proof of the Kettle’s ultimate exit point before being satisfied with the answer. And until we hear otherwise, we will declare this mystery (mostly) unsolved.

Rumors that locals once threw a car into the Devil’s Kettle sometime in the 1970s are likely just that- rumors. We highly doubt it ever happened.

One side of the river rumbles onto a stone embankment and down the rocks as waterfalls typically do. The other side, however, flows into a geological wonder known as the Devil’s Kettle Waterfall, and… disappears?

The Devil’s Kettle Waterfall is located on the Brule River in Judge CR Magney State Park. To get to the park from Grand Marais, drive northeast on Highway 61 for about 14 miles until you see signs for the park. The park address is 4051 Highway 61, Grand Marais. It is located across the street from Naniboujou Resort.  You must have a State Parks Pass or pay for a day pass to park.

Once in the park, follow signs to the Devil’s Kettle. The hike is short but requires hikers to go down many stairs to get to the falls. Then, you must climb the same stairs to get back to the parking area. It’s a lot of stairs.

Listen to the Devil’s Kettle Waterfall episode of Exploring the North Shore Podcast: 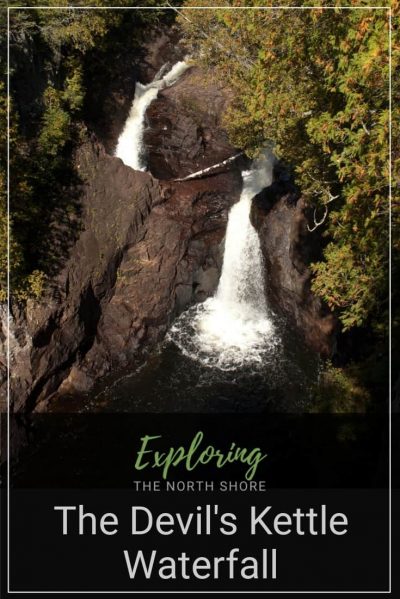