It’s not uncommon to spot a fox while visiting the North Shore. The red fox (Vulpes vulpes) population in northern Minnesota and Canada is alive and well. This small wild dog is even living and thriving in more populated areas. So you don’t need to look too hard to see one.  What you don’t see as often, however, is the unique color variant known as the cross fox.

What was once thought to be a separate species entirely, the cross fox is a red fox with a melanistic color variant. What makes them unique and distinct from the common red fox is the long, dark stripe that runs down their back and intersects with another stripe of dark fur that runs across their shoulders, creating a cross-like shape of dark fur.  This gives this variety of red fox its name. The black fur also covers parts of their face, neck, and chest. This gives them the appearance of wearing a mask. Some say it makes them look like a muddy red fox.

It is estimated that this variant accounts for about 30% of red fox species, so they aren’t too uncommon that your chances of spotting one are next to impossible, but they are rare enough that spotting one is pretty exciting.  They call the northern parts of North America home and are seen more often in Canada than in the United States, but sightings frequently do happen in Minnesota, especially near the US/Canadian border.

What makes the cross fox unique and distinct from the common red fox is the long, dark stripe that runs down their back and intersects with another stripe of dark fur that runs across their shoulders, creating a cross-like shape of dark fur and giving this variety of red fox its name. The black fur also covers parts of their face, neck, and chest, almost giving them the appearance of wearing a mask.

Spotting a cross fox can be a bit of a challenge. If seeing one of these beautiful creatures is high on your list of things to do while exploring the North Shore, plan to head as far north as possible. There have been sightings of one in recent years near the US/Canadian border in Grand Portage.  Visit the Grand Portage State Park and keep your eyes peeled. Plus, areas of the Gunflint Trail and Boundary Waters Canoe Area.

While the common red fox can be seen even in town in some areas, there are quite a few that will roam the Highway 61 area just east of Grand Marais and on the lower part of the Gunflint Trail, the cross fox is a bit more elusive. If you happen to see one, consider yourself lucky! 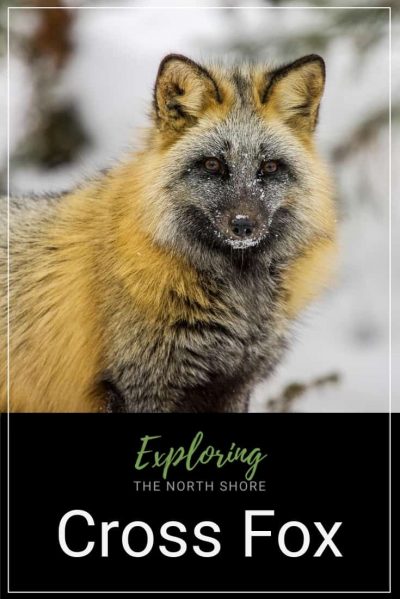 Everything Else
Lake Superior’s Twitter
Lake Superior's Twitter If you have spent any time along the shores of Lake Superior, you know that ...
Hidden Gems
Ghost Towns
Ghost Towns of the North Shore While Taconite Harbor, located near Schroeder, just might be the most ...
Activities & Attractions
Aerial Lift Bridge
Duluth's Aerial Lift Bridge Duluth became the proud home to the United States’ first transporter ...