Duluth became the proud home to the United States’ first transporter bridge in 1905. Then, the Aerial Bridge, just a ferry bridge at this point, was constructed in the harbor. Later, it was converted from a ferry bridge to the present-day bridge in 1929. The Aerial Lift Bridge spans the Duluth Ship Canal which leads iron ore ships into the Twin Ports from Lake Superior. The bridge connects the Canal Park and Park Point for car travel.

History of the Aerial Lift Bridge

Park Point, also known as Minnesota Point, is a neighborhood of Duluth. It is separated from the city by the Duluth Ship Canal, which is an artificial canal that was dug in 1871.  The creation of the canal made Park Point an island and cut residents off from the rest of Duluth.

During the summer months, a ferry provided residents with the connection they needed to get on and off the island.  However, when ice covered the canal during the winter months, the ferry became useless.  Then, a swinging footbridge was which allowed pedestrian crossing year-round. However, the residents of Park Point felt it was too rickety and unsafe.

So, the City of Duluth held a contest in 1892 to design a bridge that would connect the residents of Park Point.  John Low Waddell won the contest with his design for a high-rise vertical lift bridge. Unfortunately, the War Department did not approve of the project and it was scrapped by the city.

Instead, inspired by a similar bridge in France, the ferry bridge was built in 1905 by architect Thomas McGillivray.  With this design, a raised gondola moved between along the bridge. The gondola could hold up to 350 people, as well as wagons and automobiles. It took about 1 minute to cross the canal.  It would cross the canal every five minutes.

The bridge worked and met the needs of the people on Park Point until the increased number of automobiles and tourists to the area created the need for a more vehicle-friendly option. One that could transport a larger number of people in a shorter amount of time.

The Design of an Aerial Lift Bridge

The company that would design the concept for the Aerial Lift Bridge, as we now know it, was owned by a descendant of John Low Waddell. You may recall, he was the original contest winner back in 1892.  This design closely resembles Waddell’s original design. Construction of modern-day Aerial Lift Bridge began in 1929.  The bridge was completed in 1930.  This is the very bridge you will see when you visit Duluth today.

Functionality of the Aerial Lift Bridge

The Aerial Lift Bridge now allows free movement via automobile between Canal Park and Park Point when the bridge is lowered.  When a ship needs to pass through the canal it is raised up to a full height of 135 feet, and traffic is stopped on either side.  It takes about a minute for the bridge to lift and a minute to lower. Operation is done manually from a control room on the bridge itself.

There have been some historic stories surround the bridge in recent years. In both 2016 and 2018, a “once in a lifetime” opportunity became available when the City of Duluth had an opening for an Aerial Lift Bridge operator. These came about as a couple of long-time operators hit retirement age. Only five operators are employed at one time. They work 24/7 making sure the bridge is raised and lowered on schedule. They sit in the Pilot House, a little room perched in the middle of the bridge. From there, they monitor boat traffic in the harbor.

Then, in 2019, a severe winter storm swept through the Duluth area, bring with it nearly two feet of snow and ice. Because of the weight of the ice, the bridge was stuck and inoperable for the first time ever. Luckily, it got stuck in the down position. It took two days with crews working long hours to de-ice the bridge before it was functional again.

The bridge spans the Duluth Ship Canal which leads iron ore ships into the Twin Ports from Lake Superior, and connects the areas known today as Canal Park and Park Point.

Where to See It:

The Aerial Lift Bridge itself is hard to miss.  As you drive into the city from the south you will descend a hill that gives you fabulous views of the Twin Ports and the bridge.  You can enjoy sweeping 180-degree views from the Thompson Hill Information Center and Rest Area located at 8525 W Skyline Pkwy.  This is where many famous photographs of the Duluth Harbor area have been taken. To get closer to the action, head down to Duluth’s Canal Park. There, at the Lake Superior Maritime Visitor Center, you can view a lifting schedule. Then, you can walk right up to the water’s edge on the pedestrian walkway that creates the wall of the canal.  You can also view a schedule on the Canal Park website.

The Lake Superior shipping season typically runs from March until early-January. It is largely weather dependent and you won’t see as many ships coming and going from the Twin Ports earlier and later in the season.  The best time to visit Canal Park and have the best odds of seeing the Aerial Lift Bridge in action is during the peak shipping season from May through October. 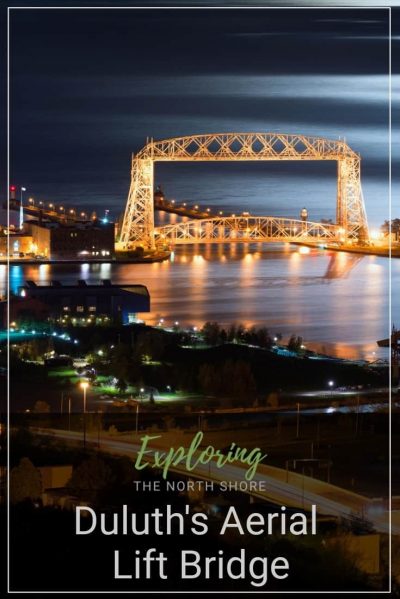